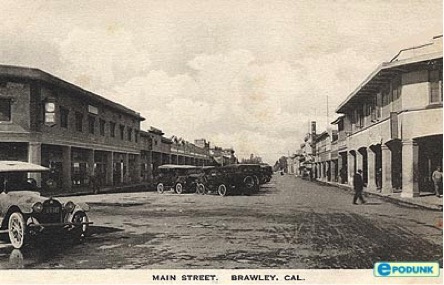 The Imperial Valley was just starting development when a circular was released by the U.S. Government in 1902 claiming nothing would grow in this desert area, even with plentiful water.

This now famous “libel” changed the name of Brawley -— which was initially slated to be called Braly. A man named J.H. Braly from Los Angeles had underwritten shares of water stock and was assigned 4000 acres of land at the center of the site where Brawley now stands.

When Braly read this circular, he appealed to the Imperial Land Company to be released from his bargain. They told him they expected to build a city on his land and call it Braly. J.H. wanted no part of it: he did not want his name connected with what he envisioned as a failure.

George E. Carter, who was building the grade for the new railroad, heard of Braly’s wish and took over Braly’s contract for the 4000 acres. The Imperial Land Company got wind of the deal and sent emissaries to Carter who sold out. Meanwhile, A.H. Heber (a principal in the townsite organizing company) had a friend in Chicago by the name of Brawley and suggested the town be called that name.

The company ordered the new town platted in October of 1902. Brawley had a petition signed and was ready to incorporate in June 1907, but deferred the matter until the new Imperial County was formed out of a portion of San Diego County that year. Then in February 1908, a petition was filed and Brawley was allowed to call an election.

The vote was 34 to 22 in favor of incorporation.

For more than a century, Brawley has remained close to its roots of being a small agricultural com­munity. Many of its businesses cater to area farmers and ranchers who also call Brawley home.

From the beginning, those who believed in Brawley were successful in creating imaginative ways to develop an oasis in what was once a hostile environment.  Now as then, the town folk of Brawley pull together to create a united vision that is attractive to visitors, homeowners, consumers, de­velopers and business people alike.